With the launch of Intel’s Haswell-R processors (now available on our Edge and Vector series desktops!) has also come Intel 9 Series Chipsets, also known as Z97 and H97. There aren’t too many new features, at least compared to Intel’s previous chipset family, but let us clear up the confusion over these two options to help you choose which is best for your needs.

Here’s a quick overview of the differences and similarities of these two new chipsets.

Intel 9 Series Chipsets do bring several new advancements to the table, the following of which are available with both Z97 and H97 chipsets.

Z97 was designed to target enthusiasts and gamers. The two biggest features unique to this chipset are:

H97 chipset targets the mainstream and Home & Office user. With no support for overclocking, unlocked k skus are wasted here. For business users, the H97 does include Intel Small Business Advantage for support of 5 M Firmware skus. 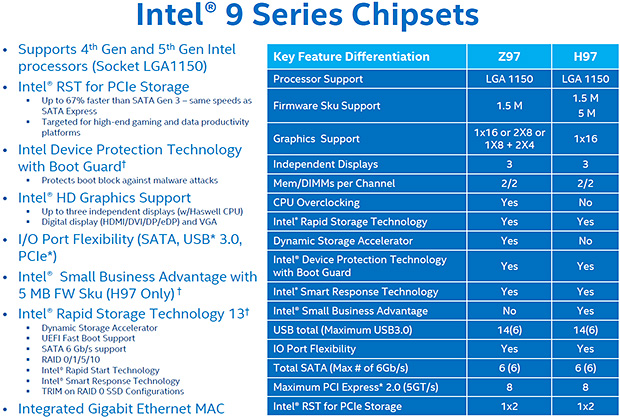